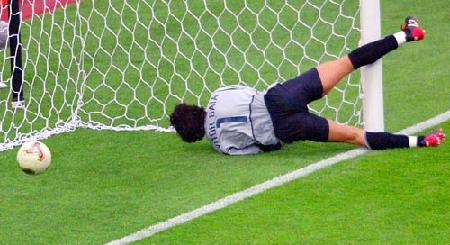 With the 2010 World Cup wrapping up, we’ve seen some great goals, perhaps none better than the blast by the Netherlands in the semifinals against Uruguay. Earlier in the club season, we saw an absolute beauty by Maicon. But no matter how big the stage, you will be hard pressed to find a more amazing goal than the following:

A freak carom off a teammate’s face from 30+ yards into your own goal? Stupefying. This goal happened during an Irish league match between Waterford United and Mervue United. Waterford went up 1-0 thanks to Mike Elwood, who might have been the best player on their team that day. Problem for Mike was that he plays for Mervue. Luckily, Waterford added two more goals to win 3-0. Still: ouch.