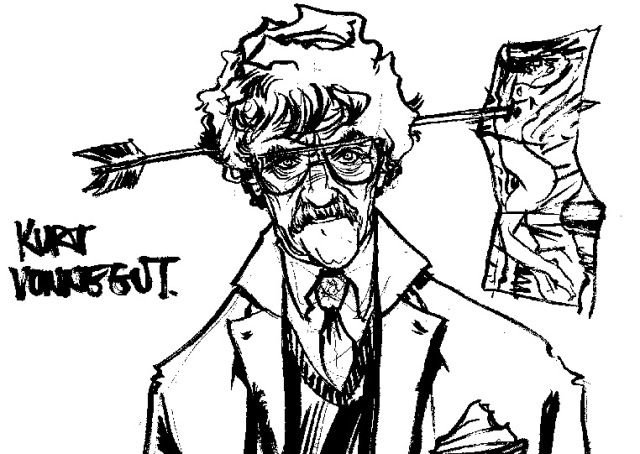 Often viewed as Kurt Vonnegut’s masterpiece, Slaughterhouse-Five interestingly seems the least-Vonnegut Vonnegut novel. The cynicism, black humor, science fiction, and imagination are all present, yet they approximate numbed cousins of the cynicism, black humor, science fiction, and imagination in his other works. Considering the consternation the narrator (author?) describes to open the book and the ineffability inherent in traumatic experience, these numbed versions make perfect sense. Still, rereading the novel, I almost felt as if I were reading a work by another author. The significance of this observation really holds little weight. As Kurt himself says 106 times in the book: so it goes.

At the core of Slaughterhouse-Five is the firebombing of Dresden during World War II. Or so the narrator tells us. Viewed from a distance, Dresden becomes a passer-by, a fleeting addition. In fact, war itself is absent more than present. On a conceptual level, this fact fits. The narrator opens the book describing the aborted attempts at writing the great World War II novel. He struggles with memory; he struggles with what parts of his experience matter; he struggles with making the pieces interlock. The crux of his dilemma comes from describing the ultimately indescribable. He wants to portray the damage he witnessed and experienced, but short of raw numbers, dates, or facts, he really cannot describe what he means at all. Hence the only way he can write his book is to construct a plot for the character outside of the war. He weaves a character withered by war, a character who talks about war, yet the story is not about war. Dresden occupies strikingly little of the narrative. In fact, most of the damage done to Billy Pilgrim’s psyche happens in war before the narrative. When we meet him, he seems nearly broken. The point to take here is the omnipresence of war, despite its absence. The effects are there, but the war really is not. This skirting of the issue paradoxically allows Vonnegut to address the issue.

Billy Pilgrim is abducted by aliens. He travels through time. He lives in a mental institution. He survives a plane crash. Along the way Vonnegut introduces the themes that pepper the book: fate, free will, meaning, time, human logic. One easily imagines Vonnegut pondered these themes during World War II or because of World War II. In the book, though, he can only overtly discuss them through these non-war constructs. The notions are, of course, in action during the war sections, but they must be implied by the reader. In terms of Vonnegut work, the plot constructs seem scattered and infrequent. The first third of the novel I found less intriguing than I did reading the book the first time. As the page numbers elevated, however, I started to sense the pattern and the reason for this scattered, infrequent characteristics. Slaughterhouse-Five could not exist in the same way as other Vonnegut works. It has to be the scattered book; it would work no other way. In fact, by the end of the book, the fact that it is scattered and the normal Vonnegutisms are infrequent was no longer something that distracted me or made me like the book less. Sure, I yearned for the biting humor, but that scenario would be alien here.

From a schematic view, Vonnegut subtly married the fractured elements of Billy Pilgrim’s life across time with the fractured elements of the narrator’s attempt and memory of World War II. Interestingly, the muted language is highly appropriate for the ineffable experience Vonnegut wants to describe. As always, the sporadic, tangential bits of life-insight that Vonnegut inserts heighten the reading experience. S-5 is not my favorite Vonnegut book, but I certainly understand its place in the canon.

Slaughterhouse-Five was rated #18 on the Modern Library’s Top 100 Novels of the 20th Century. I read it as part of the Top Project.